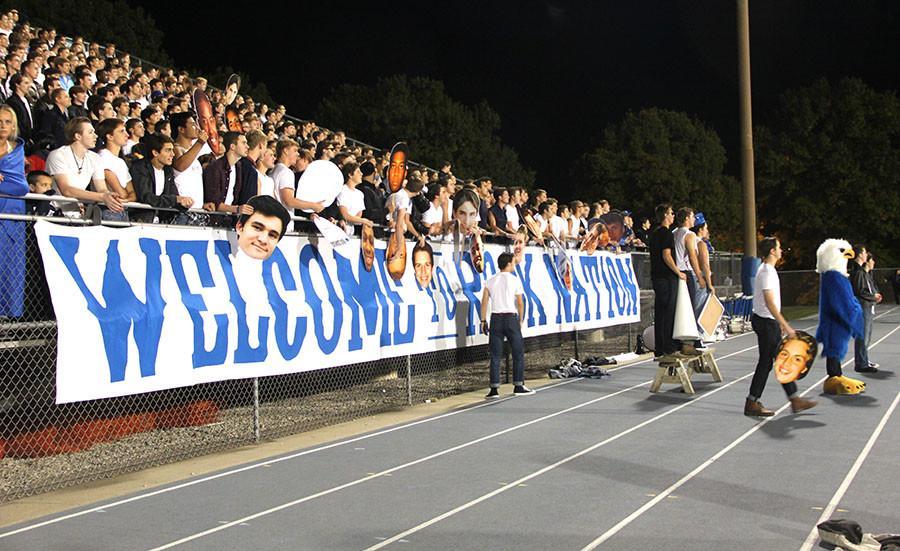 Rockhurst High School lets girls into their student section at the Homecoming football game for the very first time. The game included a performance by the STA dance team and a game of "sharks and minnows." photo by Paige Powell

by Katherine Green and Paige Powell

story by Katherine Green
This year at the Rockhurst High School’s homecoming football game, girls were allowed to be in the boys’ student section for the first time in the past ten years. Rockhurst seniors voted on students bringing their homecoming date with them to the game Oct. 9. Anyone planning on attending the game had the chance to dress up in the 50’s theme, according to Rockhurst senior class vice president, Miles Wood. The student section also welcomed any girls that wanted to attend the game, with or without a homecoming date, according to RHS Student Government Association president, Daniel Henry.

“At [the recent] alumni game, some of the alumni were shocked at the ‘girls gotta go’ cheer,” Henry said. “The past three years the RHS Student Government has discussed the idea of reintroducing girls to the student section, but the previous student leaders never took any action for fear of backlash. We know that there are plenty of people who think this isn’t the best idea, however, the potential benefits for our shared community and the opportunity for great experiences seemed too great to pass up.”

“We want to make the football games more of a social event,” Henry said. “We didn’t want guys to have to give up the chance to meet girls because they came out and supported their school. We know this can work because it did work really well until the student leadership changed the policy 10-15 years ago.”

“Personally I thought it was going to be a bad idea,” Tutera said. “Then, you know, just the intimidation factor [causes distraction], because personally I just thought back to my freshman year, and my first big Rockhurst game. I can imagine myself looking down and seeing a senior girl and being so afraid and timid that I wouldn’t do anything. That’s where I met a lot of my close friends, at that game.”

The committee voted on having a compromise where girls would be allowed in the Rockhurst Student Section for the homecoming game only.

“I think girls should always be allowed in our student section,” junior Scotty Thompson said. “That’s the way it used to be when my parents were kids, and I think it would increase attendance and make the games more fun for everybody.”
photos by Paige Powell

“If it’s one game, that’s fun right before homecoming,” sophomore Claire Ryan said. “But if it’s every game, I feel like it would make less and less people come rather than more and more people come.”

“While we support Rockhurst’s decision to allow girls in their students section, I don’t see STA following suit any time soon,” Hough said. “Although students from other schools are welcome to attend our sporting events, I think that our student section will continue to consist of STA students only. Showing up to games and supporting our peers together as a school is special to the STA experience and strengthens our sense of sisterhood. We want our student section to be a comfortable place for STA students to be able to act weird or however they want without worrying about what boys or anyone from other schools may think.”