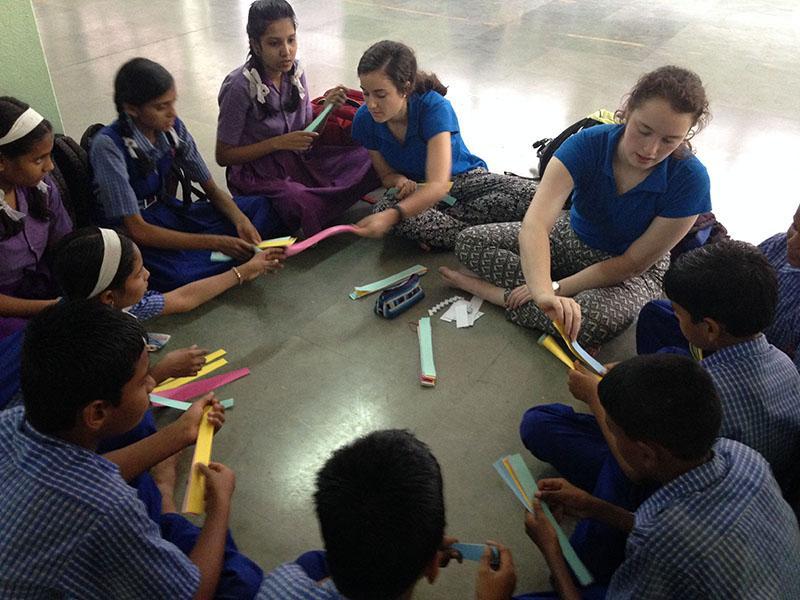 by Meredith Mulhern and Anna Hafner

This summer, senior Meredith Raymer traveled 16 hours to Pune, India through the government program of National Security Language Initiative for Youth, or NSLI-Y.

According to Raymer, the program is for students “to learn critical languages, which are described by the government as languages that aren’t commonly taught in school.”

“I chose to go to India to learn Hindi,” Raymer said. “I chose India because I’ve just always loved India’s culture, such as Bollywood movies and their clothes.”

Raymer stayed with a host family in Pune, India. Pune is four hours east of Mumbai, and Raymer stayed for around six weeks.

“The people I lived with lived in a very nice house,” Raymer said. “It was really similar to a suburban, American house with a few style differences. It was a very suburban area.”

Raymer also attended school during the weekdays, learning Hindi from 8:30 a.m. to 2:30 p.m. from Indian teachers. After the Hindi lesson, students would have dance class, music class, art class or group meetings. On Fridays, Raymer and her classmates would do community service at a government school and play with the children there.

“We helped the children with their English [at the school],” Raymer said. “We just had conversations with them and it was really casual.”

Aside from school lessons, Raymer and the students she travelled with did many other creative activities.

“[Students] had cultural classes as well,” Raymer said. “On the weekends, we went on excursions as group on Saturdays. We went to different shopping centers, we went to a Sikh temple, a Hindu temple, a church and a farm.”

However, Sundays were spent with host families, according to Raymer.

“On Sundays, our families would take us places,” Raymer said. “My family took me shopping, we went hiking, went out to eat, just different things every weekend.”

Over the course of her trip, Raymer grew very close with her host family.

“My favorite part [of the trip] was my family,” Raymer said.  “They were really great. I just really enjoyed spending time with them, and I had different things I would do with each of them. Every morning, my host dad and I would sit at the dining room table after everyone else had left for the day and we would read the newspaper. We would talk about what was going on and how Indian and American newspapers are different. My host sister and I would play basketball together, and my host brother and I would toss a ball around the house, and he taught me how to play cricket. My host mom and I would go on walks together and talk about everything. I loved them.”

As for Raymer’s overall impression of India, she only has positive things to say about her time abroad.

“Indian people are really nice,” Raymer said. “They’re really relaxed people for the most part. They all seem to be calm and happy. There’s something about how fast paced we are in America that they don’t have. They’re really generous. Indian people take such good care of people… they treat people so well and anything you could possibly want, they’ll give you.”

“My mom had heard about [the program] through her friends,” Cigas said. “She suggested that I apply, so I applied, and I got the chance to teach English there.”

Cigas, who has been to Taiwan before, says she “wasn’t nervous at all.”

“I kind of knew what to expect and I was excited for that,” Cigas said. “I was just scared for the actual teaching part because I had no experience as a teacher. I didn’t know how I was supposed to teach.”

According to Cigas, teaching the children did prove to be difficult.

“We didn’t know how to teach,” Cigas said. “We did the workshops [before travelling to Taiwan], but it didn’t really prepare us for when we were at our actual schools. We had to learn from our lessons every day and try to figure out what to do. That was kind of a struggle because we were really on our own, and we’re just kids and we didn’t know what we were doing.”

According to Cigas, she and the  other student teachers spent most of their time teaching and at their house.

“We thought we would be living with a host family,” Cigas said. “But [the program] just rented us a house. There was a member of the military doing civil service that stayed with us and some random old guy who was cool. In the mornings, there would be a van that would pick [the student-teachers] up and drive us to school. We would teach that day, eat breakfast and lunch there, and we would go back to our house and have dinner brought to us from restaurants. We would just stay at the house at night and hang out and work on our teaching plans for the next day, and we did that Monday through friday for two weeks.”

During the weekends, Cigas and the other students in her group would be taken to see various tourist attractions and the city.

“We got to make pottery, see some temples and walk around,” Cigas said. “At night at the house, we could go on walks.”

After four weeks of teaching,the last week of the program was a “tour week.” All of the participants in the AID teaching program came back together from their individual schools that they taught at and “rode around in tour buses around the country.”

“We would stay in hotels or hostels at night and visit tourist attractions during the day,” Cigas said. “We also went to a lot of night markets. They were so cool, at night, you go to these outdoor markets and you can buy stuff for really cheap. We could buy clothes, gadgets and food.”

Besides the travelling and teaching experience, Cigas’ favorite part of the trip was “the food, the fruit and the people.”

“The food and the fruit were so good,” Cigas said. “Everyone always made sure I had fruit because they knew I loved it. My group in my house was great and we became a family. We lived together for four weeks, and so that was a really good bonding experience.”

For Cigas, her trip  to Taiwan was an experience she will “never forget.”

“I would definitely recommend [going to Taiwan],” Cigas said. “I developed skills on how to be a teacher, so that was really helpful to me. I would tell everyone to go to Taiwan. It’s a really fun place.”

As for future plans to go back, Cigas has some ideas.

“The military guy that was living with us told me he could see me living in Taiwan,” Cigas said. “So now I really want to live there. But, even if I don’t live there, I would still want to go back.”

This summer, senior Jewell Allen travelled to China for a Christian mission trip under Rain Ministries.

“Rain Ministries has two branches,” Allen said. “I went through the Royal Servants branch. I chose China because of the type of ministry we did there. We worked with highschool students.”

“The first week I was in Wisconsin at training camp,” Allen said. “Training camp was really hard. It prepares you for the conditions to go overseas and they purposefully make the training hard so your ministry [in China] will seem easier.”

According to Allen, teenagers attending the training camp were required to wake up at 5 a.m., carry heavy packs around and run everywhere. After the training period, Allen and her group travelled to Fuzhou, China where her group did ministry toward children.

However, Allen and her team faced some obstacles.

“In China, it’s not allowed for Christians to come in and minister to other people,” Allen said. “So we went [into China] as tourists. In Fuzhou, we were able to be a little bit more direct with our Christianity because it was a bigger city. So, we just played with the kids and sang with them, read them Bible stories and did art with them.”

After stopping in Fuzhou, Allen’s group travelled to a small city west of Nanning, China.

“[The city] is a really small town,” Allen said. “We had to be really low-key with our Christianity. We disguised our ministry as a cultural exchange.”

Allen and her team did this by exchanging different holidays with the Chinese high school students they worked with.

“The high school students would tell us [a Chinese] holiday,” Allen said. “Then we would tell them an American holiday,  which would be Christmas or Easter. Then we could tell them more about God and Christianity. We still couldn’t tell them a ton [about Christianity]. We had to wait for them to ask, which was really hard.”

Allen and her team continued to work and bond with the Chinese students, which made them “super close,” according to Allen.

“My favorite part was working with the high school students,” Allen said. “It’s amazing, a lot of them didn’t speak English very well, so they were kind of shy. It was amazing how the language barrier didn’t hinder them from loving us. We built such great relationships with them.”

After their time with the Chinese students, the group travelled to Beijing, China for a period of debriefing.

“We went to Beijing to process our growth and challenges and just to prepare us to go back home,” Allen said.

The group also had time to explore the city, according to Allen.

“In Beijing we went to the Forbidden City and Tiananmen Square in one day,” Allen said. “Then  we went to the Great Wall [of China] and the pearl market, which was really cool.”

After her time in China, Allen said she would “definitely recommend any of the Royal Servants trips.”

“I would recommend [Royal Servants trips] to people who are Christian who want to go on a mission trip or grow closer to God or themselves,” Allen said. “I would go back on another Royal Servants trip, but probably not to China just because if I had the chance to go overseas, I would go somewhere new.”