STA does not offer paid leave for expectant teachers and staff, but offers alternative solutions. 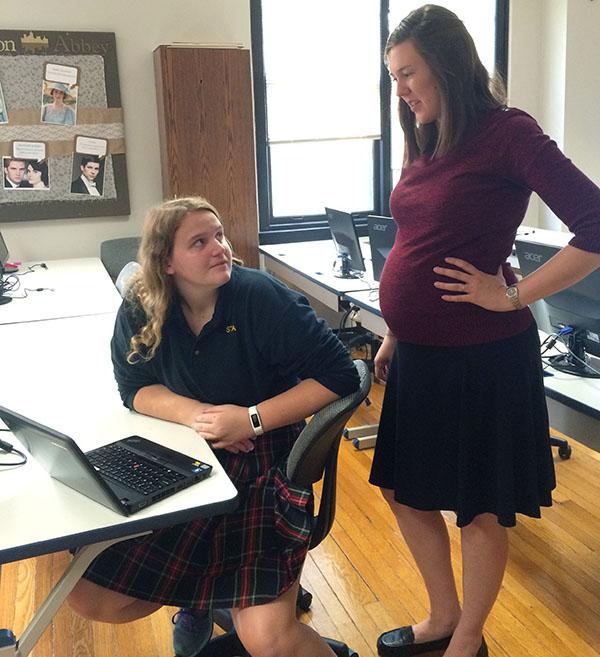 by Audrey Carroll and Paige Powell

Maternity leave has been a political topic discussed by Americans for decades. American parents who are expecting a child do not get paid for the time they take off to raise their children. The United States falls behind many countries such as Canada, Norway and Pakistan, who all offer paid leave  for expectant parents. Not only does the national policy on maternity and paternity leave affect the U.S. as a whole, but it directly affects St. Teresa’s– a school with not only a large female staff, but a body of 600 girls likely to become mothers later in life.

Under the government’s Family Medical Leave Act (FMLA), expectant parents are allowed 12 weeks of unpaid leave with the assurance they will still maintain their job when they return. St. Teresa’s Academy enacts this policy for their staff and faculty, which means paid maternity/paternity leave is not offered at STA, according to finance teacher Kayla Leatherman.

However, while STA does not offer paid leave, they do offer an additional service to help expectant employees, according to Leatherman.

“STA has a short term disability insurance that you can use for maternity leave for a set amount of weeks, and you get 60% of your income,” Leatherman said. “Although, you can’t use this if you have a preexisting condition. Since it starts in June and I found out I was pregnant in June, I’m considered preexisting, so it’s limited. I have to pay $35 a month for the disability insurance, so it’s not a true maternity leave, but it’s really nice that St. Teresa’s is offering this to begin with because that’s better than a lot of schools and companies. With that said, I wish the United States as a whole offered a paid maternity and paternity leave; I think that would be a good step in the right direction, but we’re not there yet.”
photos taken and compiled by Paige Powell

Many students agree paid leave is a step in the right direction for our country, and are surprised to hear STA has not already taken a step down this path.

“[I find STA’s unpaid leave] absolutely surprising in the sense the STA expresses itself as an all inclusive support system for everyone in our community, including our teachers becoming mothers and fathers,” junior Michaela Coleman said.

While unpaid maternity and paternity leave is a hard pill to swallow amongst the STA community because of the all-inclusive values instilled in its members, St. Teresa’s is completely in compliance with federal law on these terms. Theology teacher Michael Sanem suggests looking at the issue through the lens of Catholic Social Teaching to learn why STA enforces this law that seems to be unsupportive of their employees.

“The issue here is ‘Who’s responsible for this?,’” Sanem said. “If you look at it through Catholic Social Teaching you apply subsidiarity; if a lower level can deal with this, if a family can absorb the financial burden, then more power to them, but the reality is as far as development goes, the United States is one of the hardest countries to have a baby in… STA is a small entity that can’t absorb the burden…they would have to pay for a [substitute teacher] and a teacher on leave, and they just can’t afford to do that. This is not the fault of STA, it’s symptomatic of a larger issue.”

The Family Medical Leave Act was signed about 20 years ago by President Bill Clinton and demanded employers to provide up to 12 weeks of unpaid leave with continuation of health benefits in the event of family illness or a newborn child, according to the New York Times. The government was heading in a progressive direction by providing an opportunity for parents to take off work to raise a child, but neglected noting a possible outcome of providing federal money towards the cause. Unpaid maternity leave under FMLA  is a result of “a lack of foresight,” according to Sanem.

“When the government initiates [the FMLA], it forces companies to absorb the cost,” Sanem said. “So it’ll give you a mandate that says ‘This is really important, you should do this’ but it doesn’t give you the means to carry it out.”

Leatherman agrees,  saying it would be a huge help to have financial assistance from the government because it is already hard enough to raise a baby, twins in her case, especially for the first time. However, STA’s assistance in the process has been very helpful according to Leatherman.

“STA helps you create a payment plan,” Leatherman said. “If we hadn’t done that, I wouldn’t be receiving a paycheck at all.”

According to Sanem, STA has been very helpful in letting him use two weeks of accrued sick days to take a paid paternity leave.

“I’m very grateful  because it will allow me to take off more time than I could unpaid,” Sanem said. “[My wife], since she’s a small business owner, may not even be able to take more than two weeks of maternity leave… I need to be able to be there for my family and help support and feed them.”

Catholic Social Teaching says families are the backbone of a community, according to Sanem, but it is difficult to start a family under FMLA.

“Using Catholic Social Teaching and my own personal beliefs, [unpaid leave] is such a mistake in priorities because it makes it so much harder to raise a family,” Sanem said.

As an inclusive, Catholic institution, STA clearly recognizes the difficulty in raising a family in today’s society and supports their employees by offering options like short term disability insurance or paid sick days.

“[STA] is doing everything they can, and beyond, to make this work and trying to be prepared for when I leave,” Leatherman said.

“Overall, this job is family friendly, we have a great community here,” Sanem said. “Obviously it would be ideal to have paid maternity leave, but I don’t see how any small organization like STA who’s not making a large profit can absorb the cost and benefits of it on their own.”

It is important to realize that while STA is a great community, it is not isolated and suffers from unpaid maternity and paternity leave as a result of being a part of a larger institution, according to Sanem.

So it seems St. Teresa’s is going beyond their expectations as an employer to provide for their employees, but still is unable to provide a fully paid maternity or paternity leave. And although faculty and staff at STA are able to receive this compensation, other schools and businesses are not so lucky. Catholic Social Teaching requires the government to step in and intervene at the point when small entities are struggling, so now it is a matter of waiting for lawmakers to take action to help the United States provide paid leave for its citizens