Nobody Puts Kenzie In The Corner: This Musical Will Change Your Life

Hello, my name is Mack O'Guin, and I would like to share with you the most amazing show. 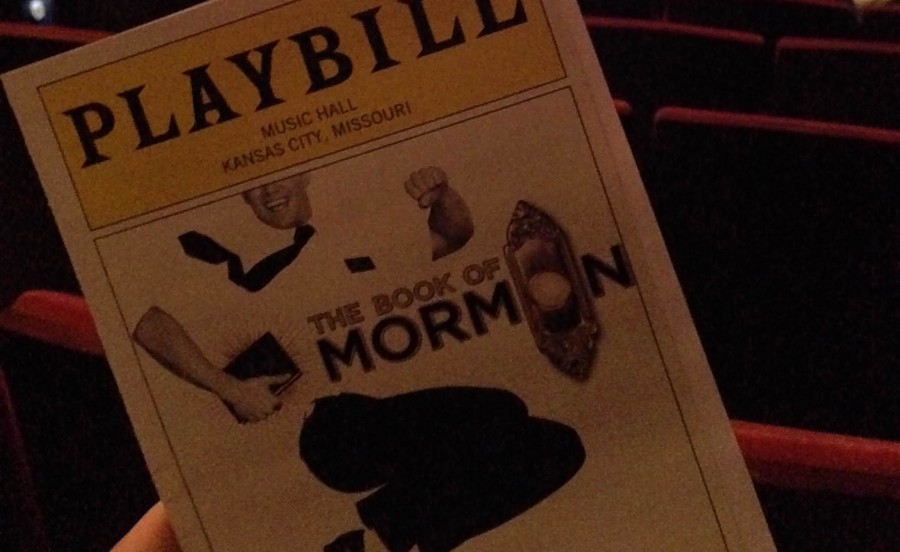 by Mackenzie O’Guin
“The best musical of the century.”

“The kind of evening that restores your faith in musicals.”

“Grade A: The funniest musical of all time.”

“A crowing achievement. So good it makes me angry.”

When Trey Parker, Matt Stone, and Bobby Lopez decided to write a musical on Joseph Smith and the Mormons, it was destined to be either hilariously excellent or horrifyingly irreverent. Either outcome is possible depending on who you ask. For those unfamiliar, Book of Mormon (BoM) follows Mormon missionary Elder Price as he journeys to Uganda to enlighten Africans about Jesus.

As one who likely came out of the womb singing show tunes, I jumped at the chance to see Book of Mormon live while it’s in KC. Sophomore Christina Kirk and I scored two tickets for the Saturday 2pm performance at the Kansas City Music Hall, Christina went in having seen the musical seven times (once within 24 hours of us going) and I having seen it zero.

I would like to begin by saying that the experience was absolutely phenomenal. The cast was thrilling and dynamic, whereas the set and costuming lent towards the novelty of the performance. Everyone knows that I love the opportunity to try and critique whenever possible, but there is literally nothing I could possibly nitpick. The entire production was flawless, from start to finish.

In an attempt to keep from spoiling any plot points, I’ll keep my discretion of the plot liminal. What I can eagerly disclose, however, is my opinion on the crude (and borderline ungodly) content of the show. I’d first like to preface any and all points I bring up by saying that BoM (in my interpretation at least) is whole-heartedly satirical. I say this because of its near-morbid portrayal of stereotypes. Like any satire, the blunt use of stereotypes is so shocking that it causes one to question whether or not one holds the displayed biases at heart. BoM’s sole saving grace from being little more than a mockery of the Mormon faith is the fact that, from my perspective, it merely uses the faith as a vessel to deliver a larger message about religion in our world as a whole. Is that fair? That’s for the individual to decide.

To prove my point, I spoke with a friend of mine and member of the Church of Jesus Christ of Latter Day Saints, Jonathan Castillo.

“It is offensive, but at the same time, it’s a way that many can open their eyes and question if what’s portrayed in the show is true, which allows the members of the Church of Jesus of Latter Day Saints to actually understand our faith better.” Castillo said. “The Book of Mormon isn’t just offensive to Mormons, it’s offensive to the world of Christianity. Baptists, Catholics, and many others have responded with offended comments.”

On the flip side, the playbill for the show had multiple ads for the Book of Mormon (the actual religious text), with members of the church endorsing the musical. Whether this is insurance to protect against inevitable accusations of mocking a prominent religion or an honest effort to advertise the Mormon community, I’m unsure. I choose to believe that the intent was truly to support the Mormon community.

Thank you, as always, for reading. Please, comment your feedback below! Remember, especially you student drivers, please be safe in our current unfortunate weather. Love you guys!

Thank you to Christina Kirk for accompanying me, the cast of Book of Mormon for the spectacular performance, Jonathan Castillo for allowing me to interrogate you on your beloved faith, and the Church of Jesus of Latter Day Saints.