Nobody Puts Kenzie In The Corner: Fries Are Disgusting Too, Actually 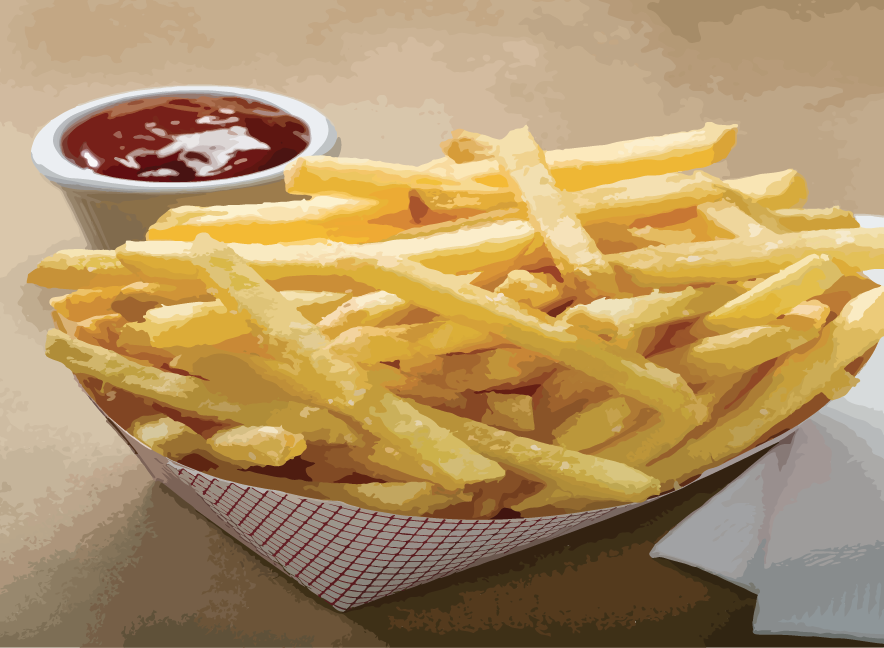 by Mackenzie O’Guin
It’s a balmy Friday afternoon. In the STA pub room, a small huddle of aspiring journalists (and one graphic designer) congregate around a conference table with furrowed brows and a unanimous goal in mind- to brainstorm topics for the graphic designer’s blog.

“You could eat a bug.” junior MaryMichael Hough suggest. The designer shakes her head.

Sophomore Madi Winfield spins over in an office chair, “How about Halloween Haunt?”

Yet again, the designer shakes her head. She sips her coffee for a long moment before replying, “I’m at my sister’s house in Columbia all weekend.”

Suddenly, sophomore Alex Frisch grabs the designer from across the table, pulling her close.

“Mackenzie, I have an idea,” Frisch whispers, “but you’re going to need a lot of fries…”

Imagine my sister’s surprise as I explained to her that I needed her to drive me through every fast-food joint in Columbia so I could eat an ungodly variety of french fries for a grade. Imagine her neighbor’s surprise as I lumbered out of her car with multiple paper bags in each hand, every one brandishing a different logo. Why did we have french fries from every drive-thru within a 10-mile radius? Because we were going to attempt a blind taste test and try to match the restaurant with their fries, obviously.

“But, Mack, why are you so useless and talentless that you can’t even identify your french fries’ restaurant of origin?”

First of all, theoretical reader, shut up. Second, this was actually much harder than it looked. As someone who doesn’t actually like fast-food all that much, this was even more of a struggle. Ultimately, the issue here is that french fries are actually far more diverse than they should be for greasy potato chunks.

When picking up the fries, my sister Monica and I first went to Wendy’s. The agitation on the woman’s face as we ordered a single small fry was unrivaled. Our request warranted a similar reaction from McDonald’s (in their defense, they were far too busy with other customers to be troubled with single small fry orderers like ourselves). The cycle then repeated itself at Burger King, Sonic, and Culver’s before our journey culminated and we headed back to Monica’s house. For reasons still unbeknownst to me, fast-food vendors find it obnoxious when you congest their daily business with orders as trivial as fries, especially when they see the to-go bags of their 4 closest competitors in the passenger’s seat.

Upon arriving at Monica’s place, I curled up on the couch blindfolded as she laid out the fries with the utmost finesse. As the video started rolling, I realized once again that I had taken on a challenge far larger than I had originally intended. As you saw in the video above, I didn’t exactly pass with flying colors. But, honestly, can you blame me? All the fries, save Culver’s, were slightly cold and more than a little upsetting. It is the emotional distress I was put under by  the unappetizing experience that I choose to blame for my failure at french fry identification, and I will continue refusing to admit defeat because of it.

However, one must wonder, did I really fail? Would it have been more unnerving if I had successfully identified every french fry with complete ease? If you frequent any drive-thru so frequently that you can perfectly distinguish their fries from their competitors’, you should probably reevaluate your life priorities. Perhaps I’m just bitter due to my stunning loss, but I think I’m onto something here. Maybe my failing should be, if anything, reassurance that I’m on the right path after all.

Thanks for reading again this week, everyone. I know this is a ridiculously short post, but with Halloween and other family festivities, I didn’t really have the time to make the crazy outrageous post like I would have liked to. However, next week’s post is going to be absolutely shocking to say the least, so get excited for that! I know it will compensate for the lackluster post I have bestowed upon you this week. On that note, I want to again thank Christina Kirk for editing this video so wonderfully. I literally gave this to her tonight and she did a great job, as usual. Anyways, again, thank you so much for reading! I love you and have a great week.

Special thanks to Monica for letting me take over your house for the weekend/driving me around/buying me fries/filming me, Josh (Monica’s boyfriend) for letting me steal your flannel, Christina Kirk for editing this video, all of the aforementioned fast-food restaurants for contributing to my train wreck of a blog, myself for that fantastic french fry graphic, Culver’s especially for having the best fries in the bunch, and Alex Frisch for this gem of an idea.