Nobody Puts Kenzie in the Corner: Milkshakes Are Disgusting 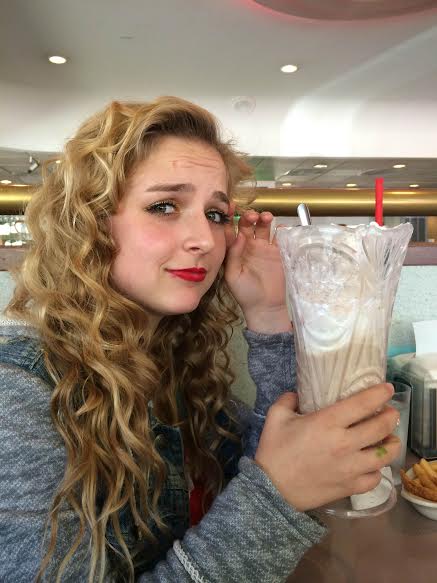 Sophomore Mackenzie O'Guin holds up a half-finished skyscraper, with noticeable fear in her eyes.

Friday afternoon, I did the Winstead’s Skyscraper Challenge.

It was a horrible decision.

Upon adding that item to The List, I didn’t actually know what all the challenge entailed. That was my first mistake. When a certain Editor in Chief (hint, Libby Hyde) insisted I do the challenge by myself, I foolishly agreed. My second mistake.

As I ordered my Skyscraper at the Plaza Winstead’s, naive and mentally unprepared for the journey ahead, I probably should’ve known from the knowing glint in my waitress’s eye that I had a big storm coming.

For those of you who don’t know, the Skyscraper is 64 ounces of straight up milkshake. When they present you with the beverage, the wait staff parades throughout the restaurant singing an outrageously cheery song (“Skyscraper, skyscraper comin’ your way/ We’re gonna do it/ The Winstead’s way/ Woot woot”). The entire restaurant stares at you, eager to watch you suffer and fail. The real cherry on top (pun intended)?They bring this monstrosity out in a vase. Not a cup, not a bowl, but a gigantic decorative vase.

I began hopeful in my ability to stomach unholy amounts of sugar, but upon realizing the fill line hadn’t budged even after a solid ten minutes of effort, I wondered whether or not I had the constitution needed to complete the task at hand.

Around ounce 17 one thought overtook my mind: there are starving children in Africa. People are dying right now globally, people that haven’t eaten in god knows how long, but here I sit drinking a 64-ounce shake because I can.

That’s when my inevitable introspection kicked in. The fact that competitive eating exists feels like, to some extent, a bizarre joke. There are thousands of eateries worldwide where you can literally win tangible prizes for inhaling unhealthy amounts of food for no legitimate reason. The competitor has nothing to gain, aside from a substantial amount of weight. The party holding the competition doesn’t benefit considerably either. Really, the entire event is the pinnacle of the wasteful overindulgence that eats away at our society (pun intended). I mean, sure, there are impoverished millions who may or may not eat any time in the foreseeable future, but let’s pool our resources and overfeed those who don’t actually need it. This is not to demean the aforementioned few who can make a living off of eating competitively; frankly, I admire your determination. However, I do ponder the state of a society that condones such excessive consumption for sport.

Why was I reflecting on the selfish yet glorified gluttony of humanity as a whole? After forty-five minutes of nonstop shake-drinking, the mind begins to wander. Besides, at that point, I wasn’t even tasting the beverage anymore. If I could have experienced its flavor, however, I would guess it tasted something like defeat. Thus, anything to get my mind off of the task at hand was quite welcome, no matter how cynical.

The worst part of the shake, really, was the last 10 or so ounces. At that point, I was too far in to turn back, yet so extremely nauseous that I thought I might actually die before I could finish. As I reminisce on those fateful moments as I finished off the shake, two crucial epiphanies strike me: one, I hate chocolate shakes. Two, this was not at all worth it. I had no sense of post-shake pride, no feeling of accomplishment. The biggest accomplishment of the challenge, I realized, was not finishing the shake, but rather, not vomiting afterwards. However, as EiC Libby Hyde once told me, “Do it for the Dart”. I hope you’re happy, Libby.

As usual, thank you guys so much for reading. Even though I suffered miserably to complete this one, this was still so fun to write. Also, thanks millions to those of you who commented on my last posts or stopped me at school over the last week to compliment this mess of a blog. Thanks to you, we’re off to a fantastic start, and I can’t wait to see where this year takes us. I love you all so much and I hope you have a wonderful week!