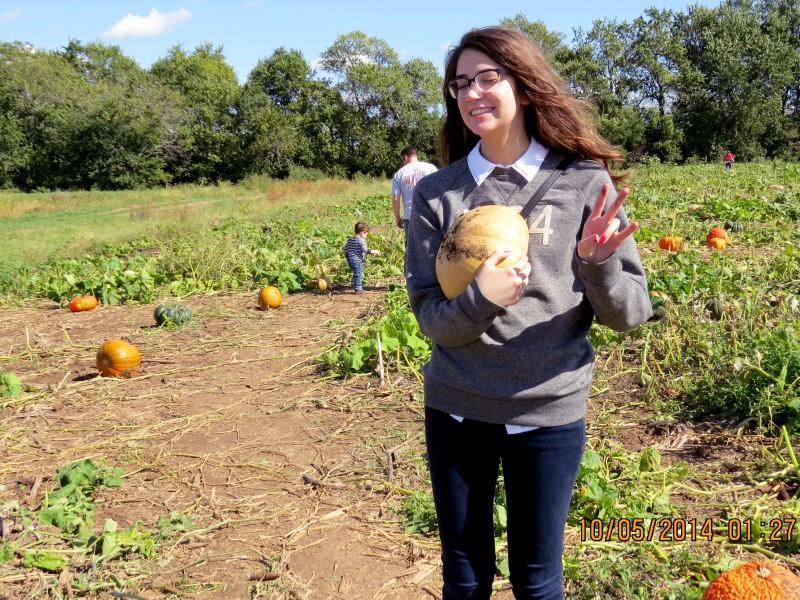 Cassie cradles a pumpkin after completing the maze. photo by Mackenzie O'Guin

Have you ever felt empty inside, as if the only way you’ll ever be whole is by wandering aimlessly through a field of ungodly tall corn with strangers? We’ve all been there, son.

Accompanied by sophomore Cassie Hayes and unwarranted certainty of my navigational finesse, I journeyed down to Louisburg, Kansas, for the last day of the annual Louisburg Cider Fest. Of course, I, the Lone Jack native, cannot say a single word on small-town USA, nor can I ridicule good old country livin’, but I must emphasize that Cider Fest is the embodiment of every Midwestern stereotype. Folksy mom-and-pop shops nestle alongside a hayed hillside strewn with tractors, laying witness to an endless barrage of banjo bands and caramel apple-wielding children. A small farm lies on the horizon, pumpkin patch on its right and corn maze on its left. Guess which direction we went.

Neither. Because Cassie wanted to pet the animals. Every last one.

Finally, after prying my distractible sidekick away from the fluffy creatures, we veered to the left and directly into what STA teacher Dr. Stephen Himes might refer to as rural Kansas’ heart of darkness. But, Mack, how in god’s name can one parallel a corn maze with Joseph Conrad’s Heart of Darkness? Well, ladies…

Freud’s Theory of the Psyche states that there are three levels to the human consciousness: id, ego, and superego. To Sparknotes this concept, the id demands satisfaction of primal wants and needs without discretion, the ego compromises the id’s desires to conform to societal standard, and the superego applies morality to the ego’s methods.

Now, Freud’s theory as applied to Heart of Darkness, equates the continent of Africa to the human mind. Thus, the further the narrator journeys into the African Congo, the deeper he travels from superego to id, what one might call the true heart of darkness. I could write a nineteen page paper on this, but rather, I’ll express the moral deterioration throughout Heart of Darkness like so: at the beginning of the book, students are horrified by the prospect of forced labor chain-gangs, but by the end of the novel, the same students hardly bat an eye at the sight of mass murder and satanic elephant slaughters.

To achieve a smaller-scale model of moral negligence, throw some strangers inside a corn maze for a half hour and see what happens. As we entered the maze, we encountered several families. A few of them attempted to fire up some friendly small talk with us as they passed. Nothing too out of the ordinary. It was not until about ten minutes into the maze that people’s moral walls began to crumble. Perhaps it was the monotony of the endless tunnels of corn or the fact that it was far to hot for early October, but our fellow maze-navigators’ patience was wearing thin to say the least. I witnessed a woman shove her seven year old child to the ground for leading the family down the wrong path. I watched two teenage girls near tears as they viciously began tearing down stalks of corn to try and escape the enigma that is the average everyday corn maze.

And then Cassie began throwing corn. Possibly the finest example of blatant moral disregard was when Cassie decided to tear ears of corn off the stalks and throw them across the maze, violating at least four of the rules that were explicitly stated on a large sign at the entrance. As we became more and more lost in the maze/heart of darkness, all obedience to the constructs that had been forced upon us up to that point (e.g., don’t throw corn at people, it’s barbaric) began to slowly disintegrate. With nothing around us but stalks of corn, we were faced with two questions- the first, why throw corn? The second, why not? And, in that moment, I experienced in my own small way what Freud predicted and Conrad displayed- isolation leads to immorality, which allows human beings to be inherently evil. Now, whether or not you choose to equate throwing corn to the ungodliness of Heart of Darkness is another story in and of itself, but you get the idea.

As usual, thank you so much for reading. Admittedly, this one is rough around the edges, especially considering it was written on my phone tonight in the backseat of my car on the way back from Columbia. Also, if you see Christina Kirk, please tell her what a beautiful job she did with the video. She parlayed a poorly filmed 25-minute video of Cassie and I throwing corn into art. Like usual, please comment what you thought of tonight’s post and what you want me to do next week!

Special thanks to Cassie Hayes for accompanying me, Christina Kirk for editing this phenomenal video, Madi Winfield for aiding in photo editing, and Dr. Stephen Himes for allowing me to convolute your curriculum into this mess. I did it out of love for your class.