The Maze Runner puts audience on edge of their seat 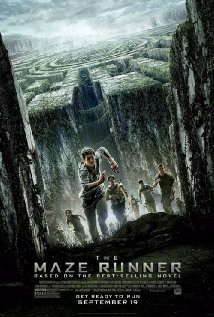 The Maze Runner, which premiered Sept. 19, is based on the fictional young adult book by James Dashner. I was on the edge of my seat during this suspenseful and action-filled movie, and would gladly pay to see it again.

The movie is set in a dystopian society inhabited by teenage boys. Each month, supplies and another boy are sent up through a metal box in the ground. The Glade, as they call the land where they live, is surrounded on all sides by a maze. Each day the Runners are sent out into the maze to run through and try to find a way out, and each day they come back empty-handed. Every night the maze rotates, changing paths and ruining the progress that the runners made the day before. If a runner gets stuck in the maze over night, they are killed by the Grievers: large mechanical, yet slug-like creatures.

The plot thickens when Thomas, played by the lovely Dylan O’Brien, arrives. Thomas is the first boy with intense curiosity. He wants to know why they are stuck in the Glade and desires to become a Runner in order to find out. The next person to arrive brings something life-changing to the boys of the Glade: a girl, Teresa, played by Kaya Scodelario. Thomas and Teresa are special and throughout the movie they are the causes and solutions to many problems in the Glade.

The plot moves at a nice pace. The movie could have been very confusing with all the explanation of the Glade and the Maze, however the creators did a good job of executing it and explaining everything concisely and clearly.

I did not expect the movie to be scary at all, but it was. It was not horror movie scary, but rather action movie scary. There were a lot of loud noises and surprising elements that would be cool to watch in 3D. The special effects were realistic; I really thought the Maze was a real place, not just computer animation.

The movie and plot really make you think. How would we as humans last in such a desolate, extreme environment? Would we actually be able to create a society that functioned properly without collapsing in on itself? Or would we all end up killing each other within two weeks?

The ending presents a cliffhanger; I cannot wait to find out what happens in the second movie. They give you just enough information to wonder what’s next, but they leave you with so much room for imagination.
Overall, The Maze Runner is a great movie with an action and suspense-filled plot and wonderful special effects.