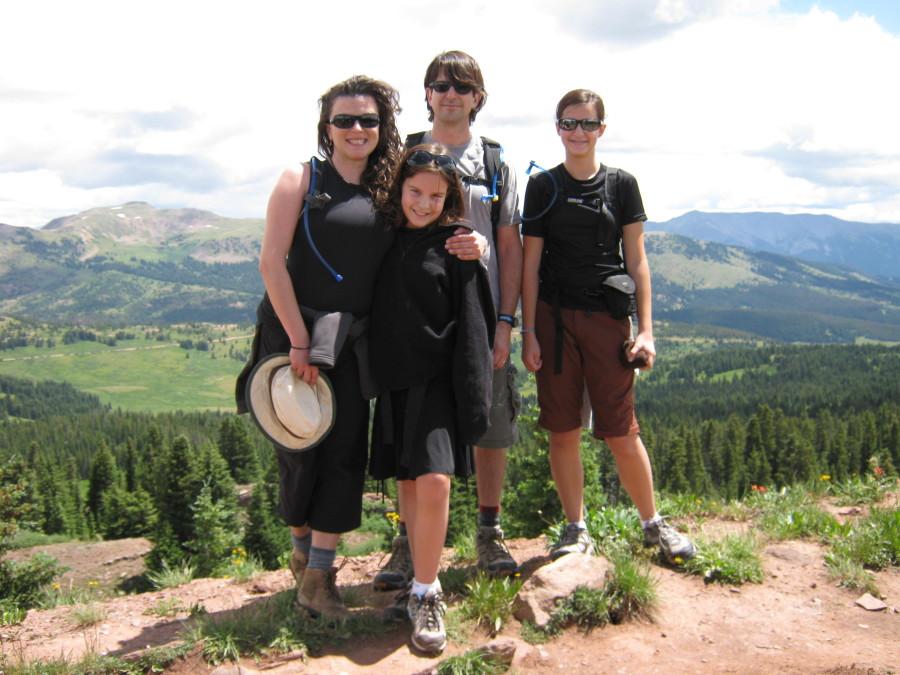 Senior Zoe Krygiel spends her spare time in more unusual ways than most teenage girls do. She goes hiking rather than shopping at the mall and hits up the paintball field instead of catching a movie at the Plaza. When Krygiel was younger her family moved around a lot, and she changed schools many times. Krygiel said this gave her a reason to “rebel” once her family stayed in one area for a long time.

“I was over change, but now I embrace it [since my life] is more settled and consistent,” Krygiel said.

Krygiel said she has participated in many “adventurous activities” throughout her life, including circus camp, hiking, bike riding and paintballing. She also has many experiences planned for her future.

Clowns, acrobats and the Arch, oh my!

The St. Louis City Museum is not only a huge playground made of recycled materials, but also  home to the Circus Day Foundation, a company that hosts circus camp for children of all ages, according to the City Museum’s website. When Zoe was 13 years old she and her sister, freshman Maya Krygiel stayed with their grandparents for two weeks to attend this very camp.

The first week of the camp students learned how to perform various circus acts , and during the second week they performed in front of huge crowds. The Krygiel sisters performed in partner acrobatics.

Zoe said that she also learned the Spanish Web (an aerial event in which the performer does tricks and spins on a rope), how to walk a tightrope and a ball, trapeze tricks and simple gymnastics.

“It was the most taxing thing I’ve done,” Zoe said. “It was a lot more work than I originally thought, but the payoff balanced it out. The hardest part was being pushed past our limits because it was very taxing on our bodies. By the end of the two weeks, I had a six pack—no joke.”

Zoe doesn’t do all of her adventuring alone. Every summer she and her family go to Colorado, where they hike 25 miles and bike 36 miles in just one week.

“It’s a really big deal for my family,” Zoe said. “We look forward to it all year—we even have a countdown.”

This summer Zoe finished her first fourteener, a mountain that reaches or exceeds 14,000 feet above sea level. Which is 12,840 feet higher than the highest elevation in Kansas City.

“It sounds easy but it’s not, because there is hardly any air at that elevation,” Zoe said. ”[The mountain] was a mile straight up and the wind was blowing like crazy, up to 60 MPH.”

Zoe’s family starts every trip with a wildflower hike, which is about a 4.7 mile hike with 1125 feet of elevation gain.

“The Mohawk Lake hike [is one of my favorites because] it has this huge, clear blue mountain lake,” Zoe states.

Zoe said she looks forward to Colorado every year, and it is one of her favorite things.

“I enjoy our annual Colorado trip,” Krygiel said. “It’s always different in a good way; [my family] all enjoys different kinds of fun.”

Zoe has also participated in many other adventurous activities and experiences. When she was younger she climbed the two-story-tall climbing wall at Dick’s Sporting Goods.

“I was about seven or eight years old,” Zoe said. “I don’t ever remember being scared when I did it. Afterwards I felt very accomplished, but according to my parents, I fell asleep in the car on the way home.”

Zoe also enjoys paintball. She recommends it to anyone interested in it.

“It’s more fun to go with a large group of friends,” Zoe said.

Zoe’s first round of paintball was simple annihilation, in which they everyone fights until only one team remains, according to Zoe.

“The first few rounds I was out pretty quick,” Zoe states. “But after that my team was constantly winning, and I would always be the last out of the field.”

Zoe first went to Jaeger’s Paintball in Kansas City for a friend’s birthday.

“When you play paintball you have so much adrenaline in your system that it doesn’t hurt when you get shot by the paintballs,” Zoe said.

Fun in the future

Zoe plans to continue her hobby of adventuring in college starting this summer, starting with the Rapha 100, which is June 20 and is a 100 kilometer bike ride .

“All you have to do is to check into Strava.com, which is a workout tracker, [and] ride the 100 kilometer,” Zoe said. “Then Rapha bike company will send you a patch for completing the ride.”

Zoe will be doing the Rapha 100 ride with her little sister and her parents.

In October, there will be a Tough Mudder in Columbia, where Zoe will be attending the University of Missouri. Zoe hopes to run it, but is unsure if she will have to enough people to create a team so early in her first semester of college.

“I am super excited to do it and I definitely plan on completing a Tough Mudder within the next year or so,” Zoe said.

Zoe said that most of the time people psyche themselves out, and things are not as scary as they appear.

“Don’t be afraid to try something new,” Zoe said. “I used to be a picky kid. I only liked certain things and places [and] only ate certain foods, mostly carbs. I only tried sushi for the first time two years ago, and now I love it.”

“It’s a lot more fun when you can enjoy or suffer through the experiences with someone else,” Zoe said. “If you end up failing, at least you have your friends to fail with you, and you will still get to walk away with great memories.”