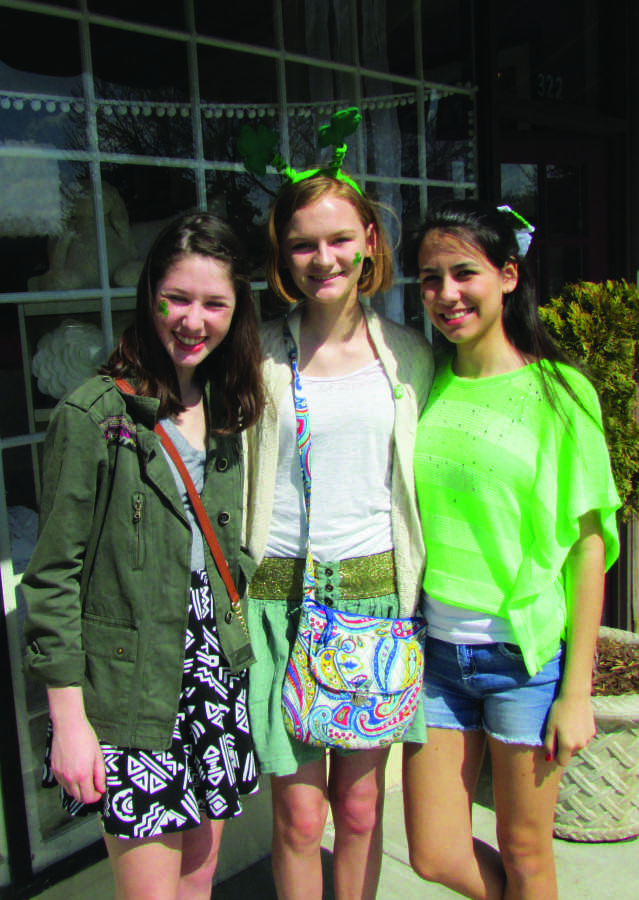 Humans of New York is a popular photoblog created by Brandon Stanley. The blog consists of a portrait and a “slice of life” quote from New Yorkers. The photos below are inspired by Stanley’s blog.

A popular meeting place for STA students, the Brookside Warm-Up St. Patrick’s Day Parade was held March 15.  Students were asked to pose for a picture and reply to the question: “What is your favorite thing about the parade?”

A little girl watches as her two-year-old brother runs up to a huge, red dog.

It is too late; Kevin has already landed into the happy embrace of Clifford the Big Red Dog. The whole family laughs and someone snaps a picture that will later hang in their grandparents’ house for years to come.

This is just one of the many memories sophomore Mary-Catherine Egan recalls when she thinks about the Brookside St. Patrick’s Day Warm-Up Parade. This year she attended the parade with her parents, sister and a few aunts, uncles and cousins.

“The best part about the parade is seeing all the cool floats in my neighborhood,” Egan said.

The 34th-annual parade was held March 15, the Saturday before St. Patrick’s Day. The parade is filled with floats and performances from local businesses, schools and other associations.

“We get about 120 entries for floats, marching units, walking units, cars, trucks and horses each year,” parade organizer Jennifer Gamble said. “We really have no way to know [how many people watch the parade], but we estimate that thousands of people view the parade each year.”

The parade has been a tradition for families living in the Brookside neighborhood for years, according to Gamble.

“We come every year we are in town,” Egan said.

Gamble said her favorite part of the parade is the Basset hounds.

“…the dogs are in costumes as they waddle along the parade route,” Gamble said.

Gamble, like many other participants, loves the atmosphere of the celebration.

“I really love how happy everyone is,” Gamble said. “Both those in the parade and those watching.”