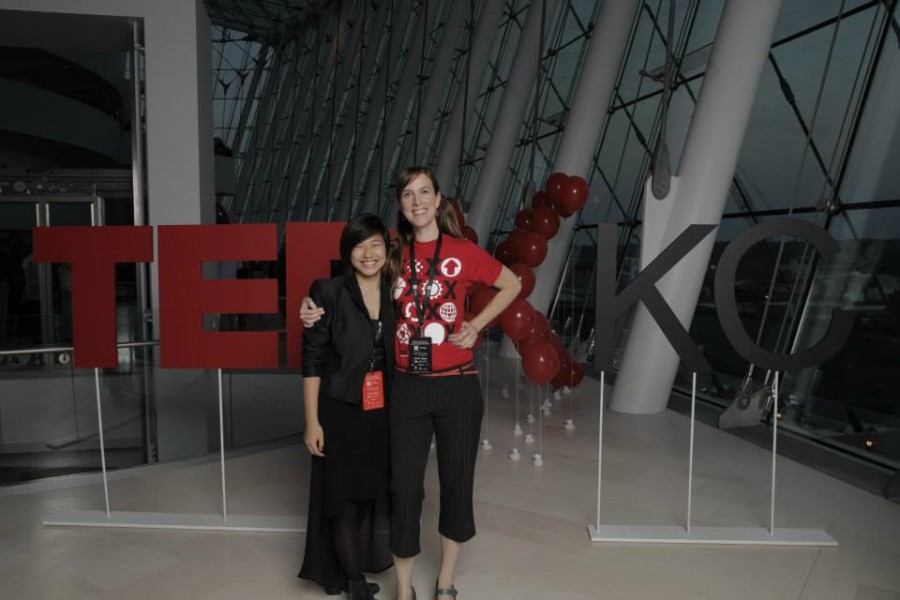 TED or Technology, Entertainment, Design is a nonprofit organization that focuses on spreading free knowledge around the world. According to ted.com, the organization’s mission is to provide “ideas worth spreading.”

A new branch was started in Kansas City called [email protected] by Beth Sarver. The x indicates that it is an independently organized TED event. The organization held its inaugural event Sept. 7 in the Truman Auditorium of the Kansas City Public Library’s Plaza Branch.

Every few weeks, a group of teens and adults meet to watch and discuss global conferences called TED Talks.

“Anyone is welcome to the meetings, but it’s usually a lot of repeats,”  TED youth co-organizer and senior Anna Leach said. “We are trying to get better about promotional information.”

The event’s theme was Re:Emergence, meaning that it focused on “looking at multiple perspectives to move into the future,” according to Sarver’s opening speech. The event started at 1 p.m. with the first session titled “System Upgrade,” which focused on global conversation about the future. The session featured poetry, talks, music and dance by local performers.

System Upgrade also included a few pre-recorded talks that were shown. TED Talk videos are filmed around the world at different TED and TEDx conferences and events.

Both the live and pre-recorded performances included a variety of topics such as confidence, money, education, brain development and music.

The second session of presentations was titled “Ecosystem of Mutuality.” It included musical and dance performances and other local speakers who focused on preparing and listening to the youth of today.

Sophomore Sarah Wunder had the chance to attend the event. She thought it was interesting, well-organized and had a good variety of speakers.

“[The event] made me think about the different aspects of people’s lives,” Wunder said. “It was a really unique experience and [the speakers] had a lot of good points. If I get the opportunity I will definitely go again.”

[email protected] has plans for the future. Sarver wants to involve more youth in the organization.

“We want it to be all youth lead elements,” Sarver said. “What youth [are] interested in doing is really important. [My] vision is to have the event be predominantly run and built by youth, and adults just as a support structure. Youth bring ideas and creativity, but we aren’t there yet.”

Sarver said she is looking for youth who want to make TED what they do instead of sports or other school-run activities.

“TED is a creative outlet that has nothing to do with school,” Sarver said. “It’s great for homeschool [students] and other youth who are looking for something to do in their spare time.”

[email protected] is also working on finding sponsorships and supporters like the library and other youth organizations.

“[TED event planning is] all volunteer work,” Leach said. “Like anything with volunteers, it will only go as far as we want it to. Everyone working with us still has jobs or school. It’s a group of people who are passionate about something they want to do in their spare time.”